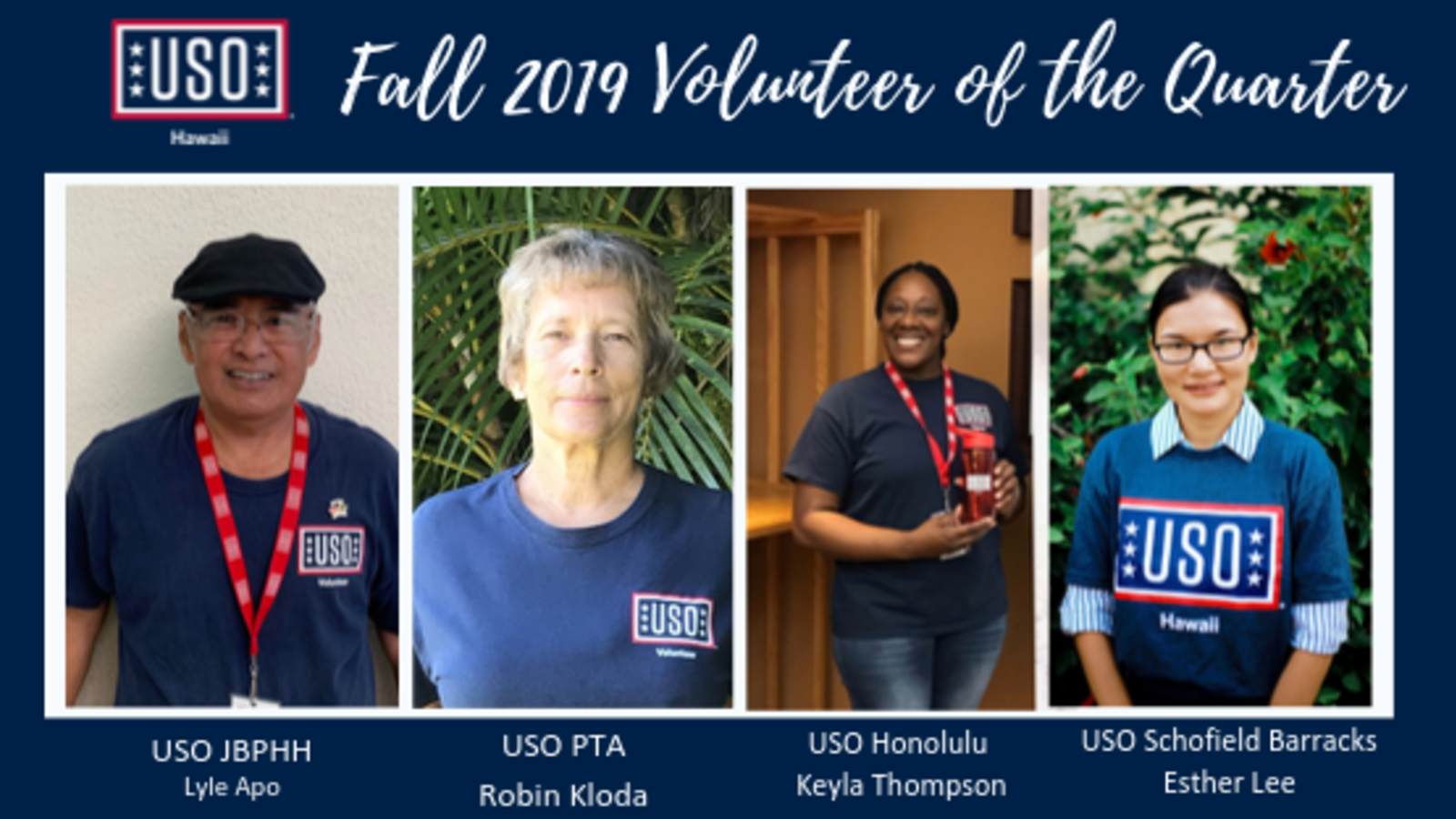 USO Hawaii Introduces the Fall 2019 USO Volunteers of the Quarter

Lyle Apo volunteers with USO Joint Base Pearl Harbor-Hickam (JBPHH) both as a Center Representative and Special Events volunteer. On a weekly basis, Lyle completes three or more opening shifts beginning at 5:00 am and often arrives early, depending on the Hickam AFB flight schedule to ensure terminal guests can access USO services prior to their flight. Additionally, Lyle regularly supports multi-shift Troop Movements and provides invaluable mentorship during new volunteer Shadow Shifts. Between September 5th and 16th, USO JBPHH hosted over 4,000 soldiers awaiting flights. The service members were greeted on nine of those mornings by Lyle, who arrived as early as 3:30 am. During the two-week period, Lyle completed over 65 hours in support of the troop movement, which we sincerely appreciate.

Lyle’s positive attitude is contagious. He takes initiative, always ensuring our service members and families needs are being met, and that they feel at home. Lyle pays special attention to service members traveling during troop movements, which can be a stressful time due to lack of sleep and regular meals. Furthermore, no matter the circumstance, Lyle maintains a calm and efficient pace. This is crucial during high traffic periods in the terminal.

Lyle embodies the USO core values of Mission First, Collaboration and Gratitude. Mornings at USO JBPHH would not be the same without him, and the USO JBPHH staff is grateful for the time he spends with us, helping to deliver our mission.

Prior to the opening of our USO PTA center in 2016, Robin volunteered as part of a larger group (VFW POST 3880). She recently decided to individually volunteer at our USO PTA center, and we have been extremely grateful for her knowledge, initiative, dedication, and creativity. Robin brings a solid knowledge base on large scale regarding catering and cooking operations, which has been very welcome at our center. She also holds experience in organizing and executing large scale events, which has greatly enhanced USO PTA’s capability to offer new and exciting programs for the service members.

When Robin joined as a USO PTA Volunteer, the positive impact she had on the center and our towards our service members was immediately apparent. Robin immediately proposed a “Sandwich Tuesday” program, which has become one of the best-received programs at the Center. During a large rotation, Robin coordinated with fellow volunteers to make approximately 900 sandwiches for one day, which fed over 400 service members. Robin’s “Sandwich Tuesdays” have become so popular that service members have come to recognize Robin’s car, and before our doors opened, there would be a line formed.

Robin is an exemplary volunteer. Her caring and “can do” attitude is highly infectious to those around her, and one can clearly see that volunteering with the USO is a passion for her. Robin is always a pleasure to be around and has become one of the most popular volunteers with the service members. She continuously gives, is gracious in her ways, and is extremely humble when service members thank her for her efforts.

Keyla has played a vital role in building a partnership between USO Honolulu and Fort Shafter. Fort Shafter was previously a location that unfortunately did not have a USO presence and one where little to no USO programs were delivered. Thanks to her connection to Fort Shafter, the USO is now regularly delivering programs that help support our service members!

Keyla has also been instrumental in USO Honolulu delivering our first innovative, out-of-center USO Program, “Monday Motivators”. This program is intended to surprise different units with coffee and donuts. It serves as a morale booster, and allows the USO to connect in a meaningful manner with our service members.

We often have guests that are flustered or stressed due to travel and Keyla handles them all with patience and compassion. She is extremely resourceful, often answer all of their questions, and she is always extremely polite and respectful to everyone. Keke is the calm within the storm, and due to her uplifting positive attitude, often diffuses stressful situations. She is genuinely excited to be a USO volunteer, and that reflects in the way she talks to guests and participates in events. Keke’s extraordinary efforts and sincere dedication to our mission is why she was selected as USO Honolulu’s Volunteer of the Quarter for Fall 2019.

Within just four months of volunteering, Esther has already logged in 369 volunteer hours with the USO! Recently, Esther made an immeasurable impact on service members and their families during a Y.U.M.M that USO Schofield delivered for 715th MIBN. At the Y.U.M.M, Esther helped to set up and serve lunch to 60 hungry soldiers who were taking a much needed break from training. She took the initiative to take on a leadership role and handled the Y.U.M.M with ease and grace. Esther rearranged the area in which the service members would sit to enjoy lunch, she steered the food line, and she even controlled the distribution of food. Esther also assisted with USO Schofield’s Campfire Story Time event which was attended by over 40 service members and their families. She played an instrumental role in getting everyone situated by welcoming service everyone to the event, which created a great first impression for families.

Esther has a positive attitude and a big, contagious smile when she is volunteering at USO Schofield. Her optimism and willingness to assist other service members is inspiring. She has a real sense of hospitality and takes pride in upholding the USO Standards of Excellence.

Congratulations and thank you for being a Force Behind the Forces!