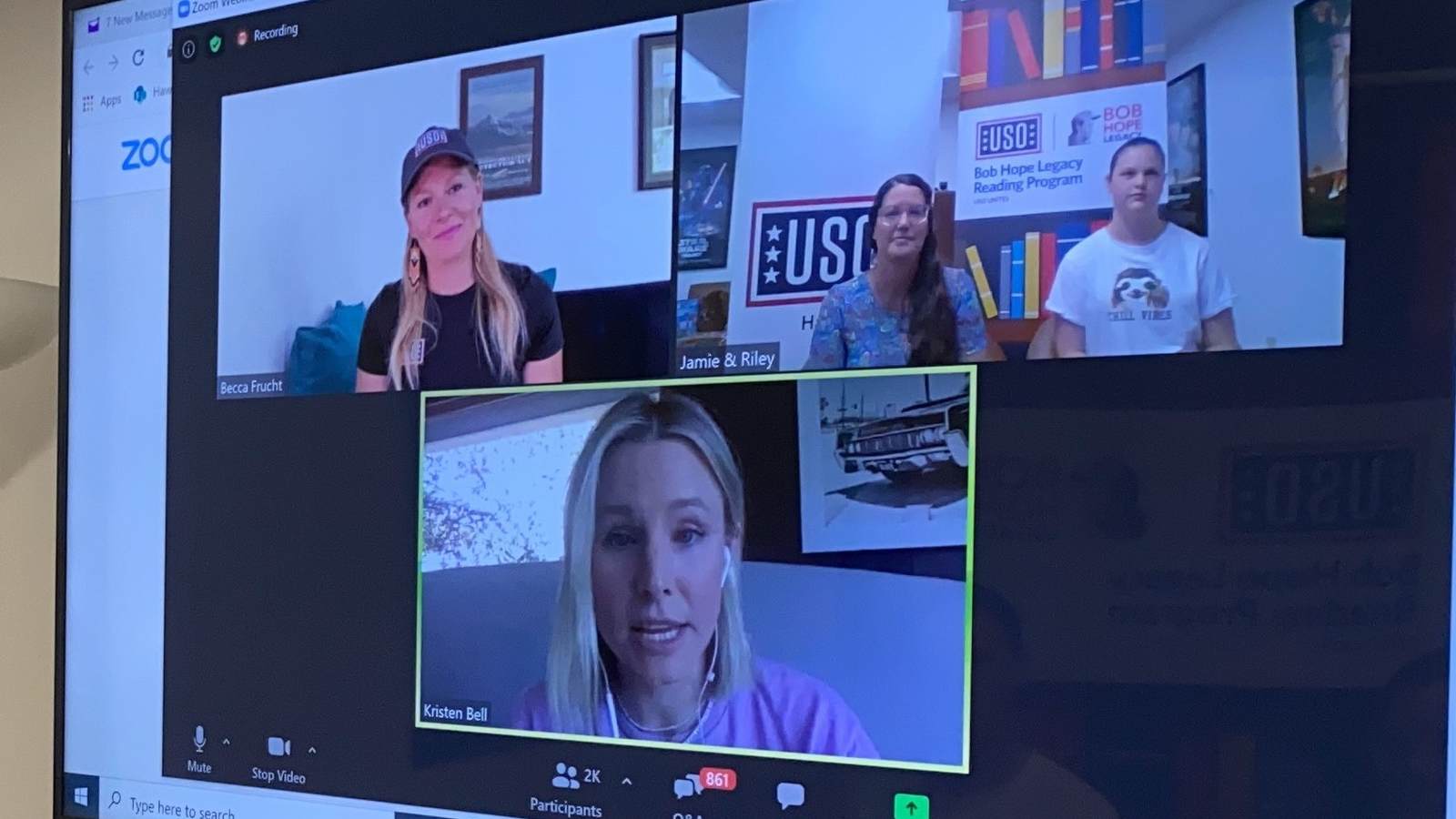 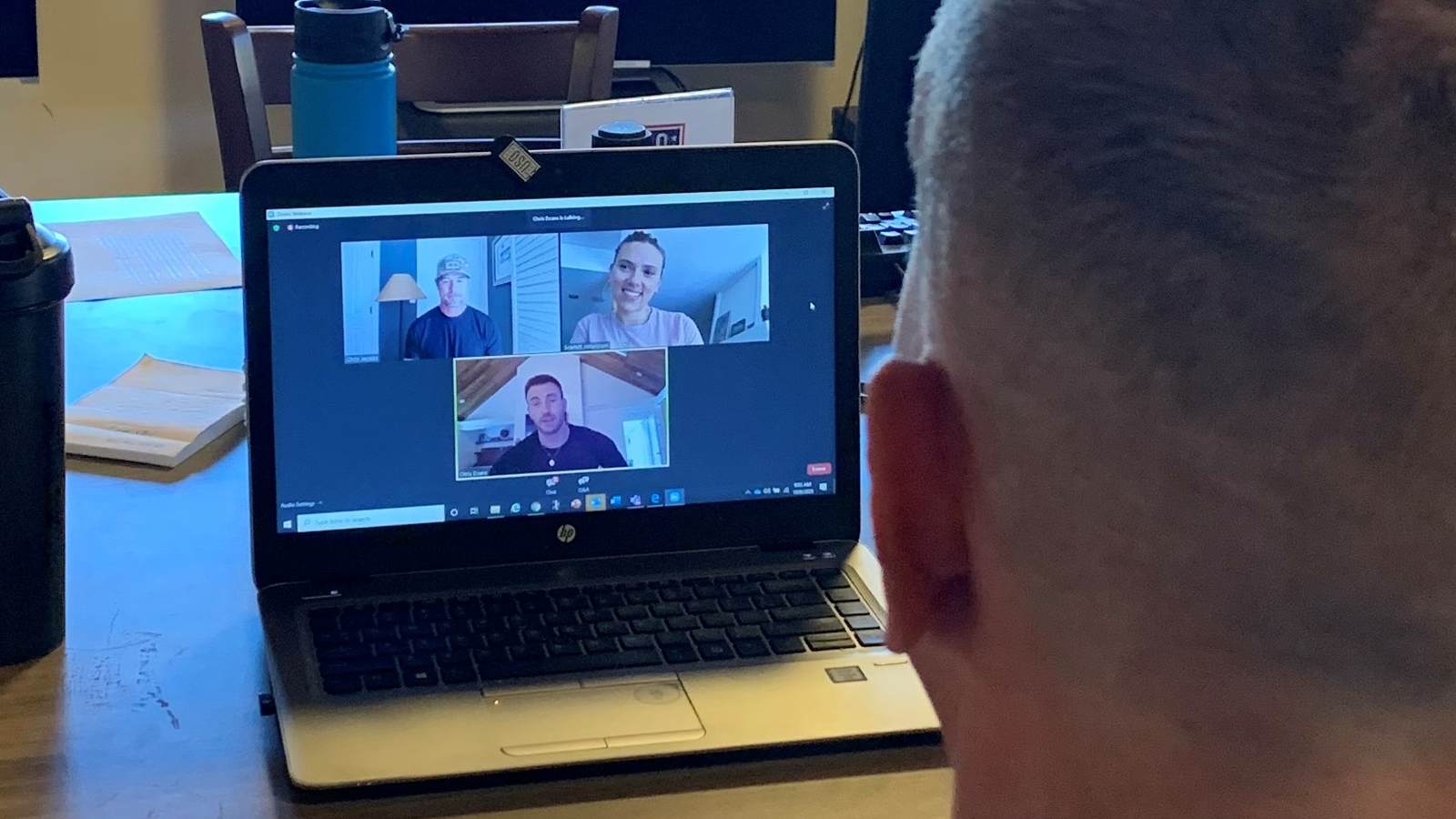 During this time of lockdowns and stay-at-home orders, the USO has stepped up to keep the Entertainment options continuing for Service Members and their families! USO Hawaii welcomed renowned actors Kristen Bell, Scarlet Johannsen, Chris Evans, and Peter Billingsley for live, virtual conversations with Service Members and families stationed in Hawaii.

On September 1, 2020, USO Hawaii welcomed actress Kristen Bell to Schofield Barracks for a virtual question and answer session. One lucky Army family stationed at Schofield Barracks participated in the discussion from the USO on Schofield Barracks. Jamie and Riley spoke with Kristen about cooking, sloths, and of course, did some singing! The family presented Kristen with a purple lei to welcome her and share in the aloha spirit. Kristen spoke about her favorite go-to meal to cook for her family and shared her gardening struggles, which most people can relate to. Sharing that her favorite meal to cook is soup with fresh vegetables from the family garden, Kristen knows the importance of feeding her two daughters healthy, fresh meals. Also conscientious of supporting the local restaurant community during the pandemic shutdowns, Bell’s family supports their local restaurants as much as they can and cook for their daughters at least once a week. The most exciting and heartwarming part of the Q&A session was when Kristen and Riley, age 13, sang the famous song together, “Do You Want to Build a Snowman,” from the movie Frozen. At first, Riley was nervous and, her voice wavered, so, like most Moms, Kristen jumped into re-assure her and surprised everyone by leading the sing-along. Afterward, the USO Moderator and Kristen congratulated Riley and announced that she was the MVP of the event!

Moving over to the Big Island at the USO Center at Puhakuloa Training Area on October 8, USO Hawaii welcomed actors Scarlet Johansson and Chris Evans, best known for their roles in the Avengers movie series. The world-renowned actors interacted with U. S. Army Garrison Command Sergeant Major of Pohakuloa Training Center. Always looking out for his soldiers, Command Sergeant Major noted that Captain America held the rank of Captain for nearly 80 years without promotion, which is no way to treat a Medal for Valor winner. Command Sergeant Major invited Captain America to the Pohakuloa Training Area to learn how military training has evolved since basic training in 1943 and an honorary promotion to Major. The invitation stands, and we would love to welcome Captain America to USO PTA!

On December 11, we then go back to Oahu for Mele Kalikimaka at USO Joint Base Pearl Harbor Hickam to welcome actor Peter Billingsley, who played “Ralphie” in the classic holiday movie “A Christmas Story.” With the famous leg lamp from the film displayed, Peter commented on how he liked the holiday movie themes, even noticing the box marked “fragile” that the lamp sat on. One child in attendance asked about the famous Red Ryder BB gun and if Peter handled and shot the BB gun while filming the movie. At the time Peter filmed the movie, he was the same age as attendee Oliver. Discussing fond memories of the movie experience, Peter did get to shoot the Red Ryder BB gun on set without any injuries to himself or anyone else. Nobody shot their eye out!

Through the USO Military Virtual Programs Series, Service Members and families can experience a sense of normalcy with the virtual events. Because of precautions associated with the pandemic, the USO innovated and broadcast worldwide to thousands of viewers and participants, leading the charge in keeping Service Members connected to Family, Home, and Country.