By by Anna Kuebler 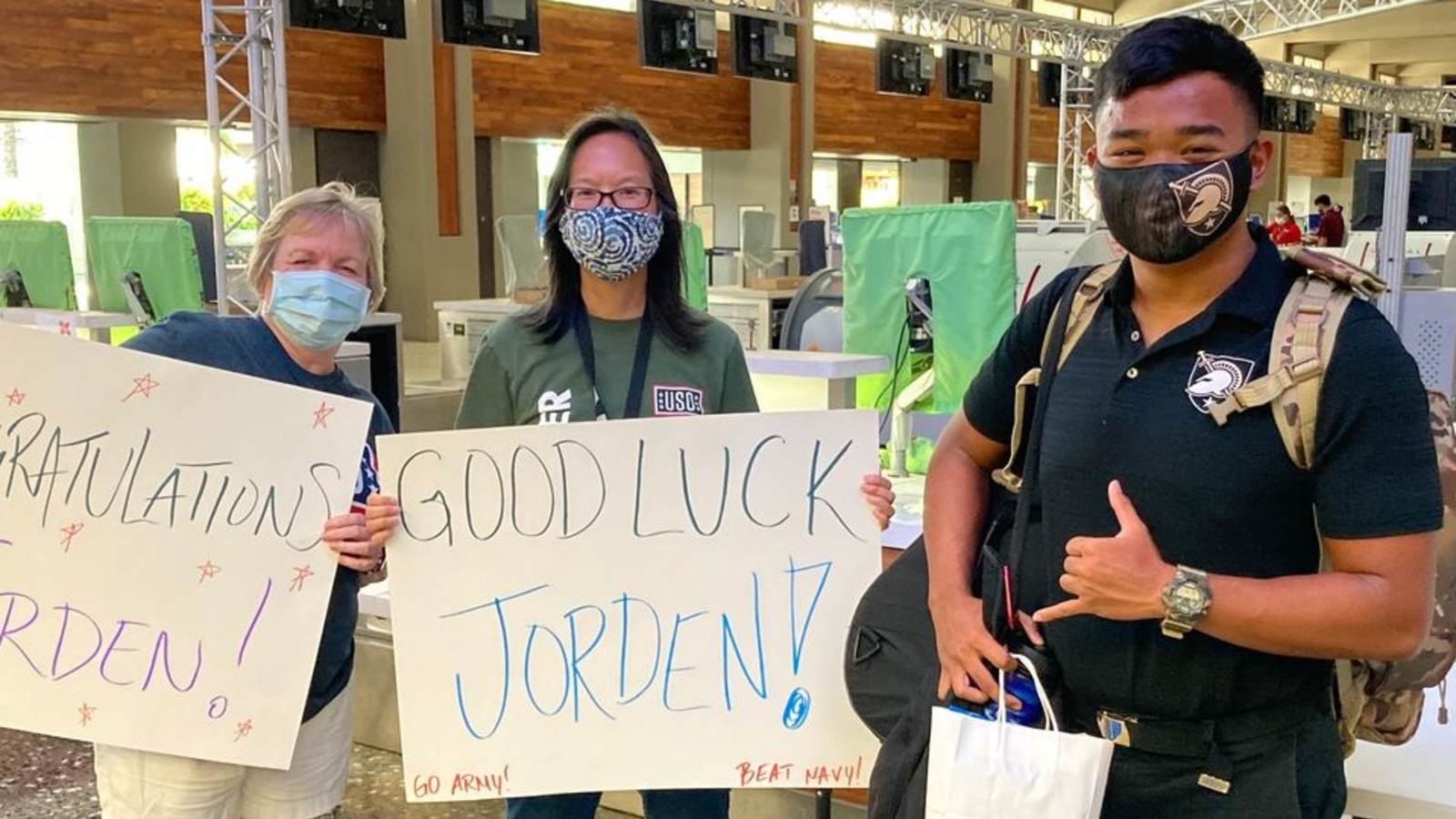 Starting college can be a nerve-wracking experience. Moving somewhere unfamiliar, making friends, learning new skills – it’s a lot to take on at 18 years old. For Jorden Corpuz, the prospect of freshman year was even more daunting, as he was headed to United States Military Academy West Point, where he wouldn’t just be starting college – he’d be joining the Army.

Luckily for Jorden, the USO is committed to supporting service members literally from the moment they join, throughout their time in uniform, and until they transition back to civilian life. So, when this new cadet took the first step in his military journey earlier this summer, USO Honolulu in Hawaii was there to give him a proper USO – and aloha – sendoff.

A Family History of Service As Americans across the country have been packing up dorm furniture and school supplies, the Corpuz family was preparing to send their son Jorden off to his first days of military service. This was especially poignant and full circle for Jorden’s father, Rupert, who had served 32 years in Hawaii’s National Guard.

Now a retired lieutenant colonel, Rupert knew just who to contact to make his son’s journey from Honolulu to New York more special. As the day for Jorden’s departure approached, Rupert reached out to USO Honolulu and asked if they could do anything to help make his son feel cared for on the long journey.

A USO and Aloha Sendoff While the pandemic has halted many people’s summer travel plans, some service members and military families still must travel out of necessity, including new recruits like Jordan.

Normally, these members of the military community would be able to find solace in USO airport centers across the country, where active duty, Reserve and National Guard members and their families can stop for a place to relax and recharge.

However, operations at most USO airport centers have been temporarily suspended since March due to COVID-19 , so USO staff and volunteers have had to quickly pivot and get creative in how they support military families on the move.

So, when the USO Honolulu team received Rupert’s request for support for his son’s departure, USO staff and volunteers were incredibly excited to assist with his request.

The USO team quickly got to work, making signs and prepping a bag of TSA-friendly snacks for Jorden to enjoy during his day-long journey from Honolulu, Hawaii, to West Point, New York. USO Honolulu volunteers Kate and Diana surprised Jorden at the TSA checkpoint, cheering him on and wishing him well as he embarked on his new journey as a West Point cadet.

“Thank you so much for the send-off,” Rupert said, after seeing the USO volunteers at the checkpoint. “It took the sting off all of us, particularly my wife, just with letting him go somewhere we won’t be able to protect him.”

Both Jorden and his family were happy to have such a heartfelt goodbye and celebration of his new path in the military. Whether they’re headed to a military academy or a Military Entrance Processing Station (MEPS), joining the Army can be a lengthy, stressful and emotional experience for both the new service member and their families. Having a support system such as the USO to cheer on a departing cadet, or to provide snacks and a place to rest for the families waiting through the MEPS process, can truly make all the difference.

After seeing the impact of the USO send-off on the Corpuz family, USO Honolulu was inspired to create a local program dedicated to support other traveling military families in a similar way. Now, when service members and their families PCS or are traveling for essential business, they’ll receive a similar bag of TSA-friendly bag of goodies called “Snacks on a Plane.”

Although it may seem like a small gesture, programs like these provide military families with a touch of USO goodness and, in this case, aloha spirit as they embark on their next adventure. In the case of Jorden, this USO send-off was his first introduction to the USO, and a reminder that the organization will be alongside him for every step in his military career from now on. For the entire Corpuz family, it was a reassuring promise that even if their son is now far from them, he’ll always have a home away from home at the USO.

“He’s such a great kid that not a moment goes by that we don’t miss him,” Rupert said. “Anything the USO can do will be greatly appreciated.”